The Lighter Side of Bikepacking

Heading away for a long weekend? Here's what I'd take...

The equipment I chose to use for the 2014 Kiwi Brevet was on the lighter side of the typical load - I got by without a backpack/camelbak, instead relying on a frame bag and a seat bag to carry my shit. Even loaded to the gunnels with food, drink and "stuff", I never wanted for extra storage, and didn't once wish I had another bit of gear during the event. I was interested in seeing how light I could go without becoming a liability, or at least breaking my stuff on some of the reasonably rugged sections of track.

A carbon cyclocross bike with carbon wheels seemed like a good place to start - below is a shot of my steed as she rolled for the 1,130km journey. 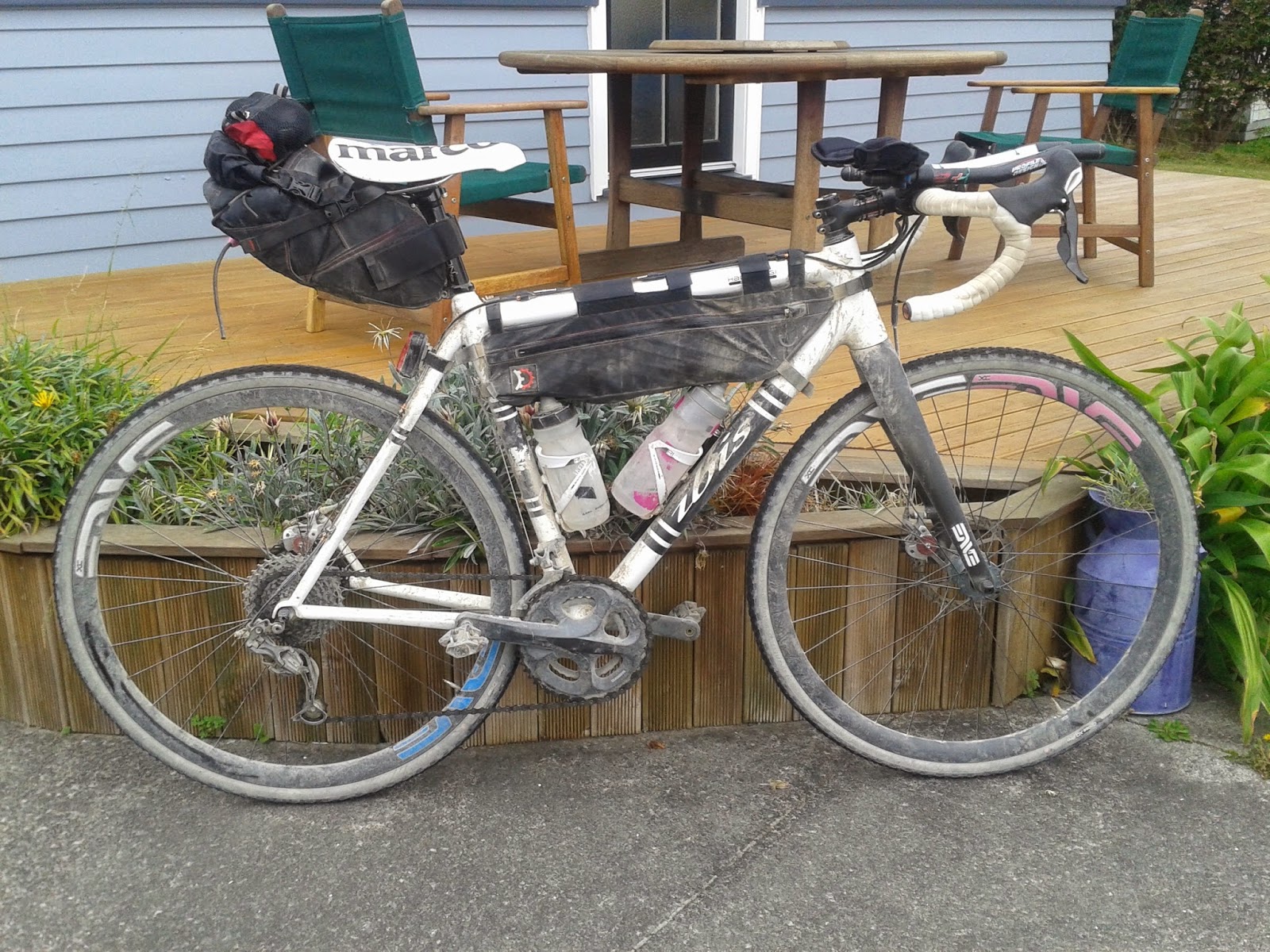 The bike itself is an Ibis Hakkalugi, recommended to me by Mike at Hyperformance Hardware. There aren't too many 'cross bikes quite like this one - the dual bottle cages and disc brakes combined with slightly less racy geo made it far and away my first choice for this sort of caper. I built it up with Ultegra (10 speed) gear, except for the SLX rear mech and matching 11-36 XT cassette. I elected to run 32c Vittoria XG Pro tyres with the TNT (UST compatible) casing, to match the UST ENVE rims. The rear tyre was shot after the 1,130km Brevet plus the 30km back to Picton...

The bags I chose were by Revelate Designs, courtesy of the fine folk at Cycletech up on the Kapiti Coast - I used the "Pika" seat bag (~8l capacity), and a medium "Tangle" frame bag (4.5l capacity). I thought they were both great for this sort of thing, my only criticism being the zipper on the frame bag got quite stiff after a couple of days being caked in sweat and dust...

In the frame bag, I tried to store items I thought I might need regularly - I was able to don the jacket, gloves and beanie without stopping, whereas taking the same items from a seat bag necessitates a stop. While it might only account for a couple of minutes, a dozen stops throughout a day adds up pretty quickly...

After a reasonably major Spot tracker issue in the 2012 version of the event (it didn't work), I snapped up a Revelate Spocket to attach to my seatbag, and it worked perfectly - the only loss of tracking was when I switched off my tracker on the first evening. I also popped on a little widget/bungee, to give me the option of lashing something to my seatbag if required - I used this to hold a 750ml bottle on the trip from Springfield to Culverdon, and again from Culverdon to Blenheim, and it worked very well.

I stashed my ipod, cellphone (useless as I lost reception about 7 hours into the ride - S.M.B, telecom), and "wallet" (eftpos card, driver license, small amount of cash) in my back pockets, along with as many bananas as I dared carry (best effort was six).

I wasn't too stressed about fluids - I know I can ride for about ten hours on two bottles putting in a reasonable effort if I need to, and the proximity of rivers and towns in the Kiwi Brevet course meant fluids were rarely going to be an issue.

All up, I had only a few kg of gear to lug around with me, which when combined with the relatively light 8kg bike meant I had a reasonably low gross weight of around 89kg as I rolled out to Rarangi.

I'd also made a cockpit change for the event (manscaping notwithstanding) - I'd fitted a set of aero 'bars, courtesy of my mate Jeff Lyall. They worked out really well, although I should have given myself more time than three days to get used to them before the event I suppose.

This setup was awesome - aside from the 'bar setup, my Garmin was good for the 17 hour days, the cue notes were easily read, and my light was absolutely perfect. The handlebars and aeros afforded a plethora of hand positions, which in turn provided ample opportunity to move my shoulders and neck around during long stints on the tarmac - something easily overlooked when "only" riding for eight hours or so. I also popped on some ESI Silicone 'bar tape too, for a bit of extra smoosh on the long days, which seemed to do the trick.

Due to the preparation I made, none of the equipment I took let me down or provided any real surprises - well, maybe the terrible tasting cherry NUUN tabs. Because of the faith I had in my equipment, I had no hesitation committing to some reasonably ambitious days in the saddle - averaging a little over 340km per day over a combination of tarmac, gravel roads, 4wd tracks, and the odd lovely section of singletrack.

The only change I would make, should I entertain this sort of thing again ( I am), is to run my new favourite tyres - Ritchey Speedmax WCS tyres in the reasonably comfortably 35c size. These are still good for extended 40kmh sessions along the flats, yet offered me plenty of traction around the Karapoti Classic MTB course a couple of weeks after the Kiwi Brevet.

Popular posts from this blog 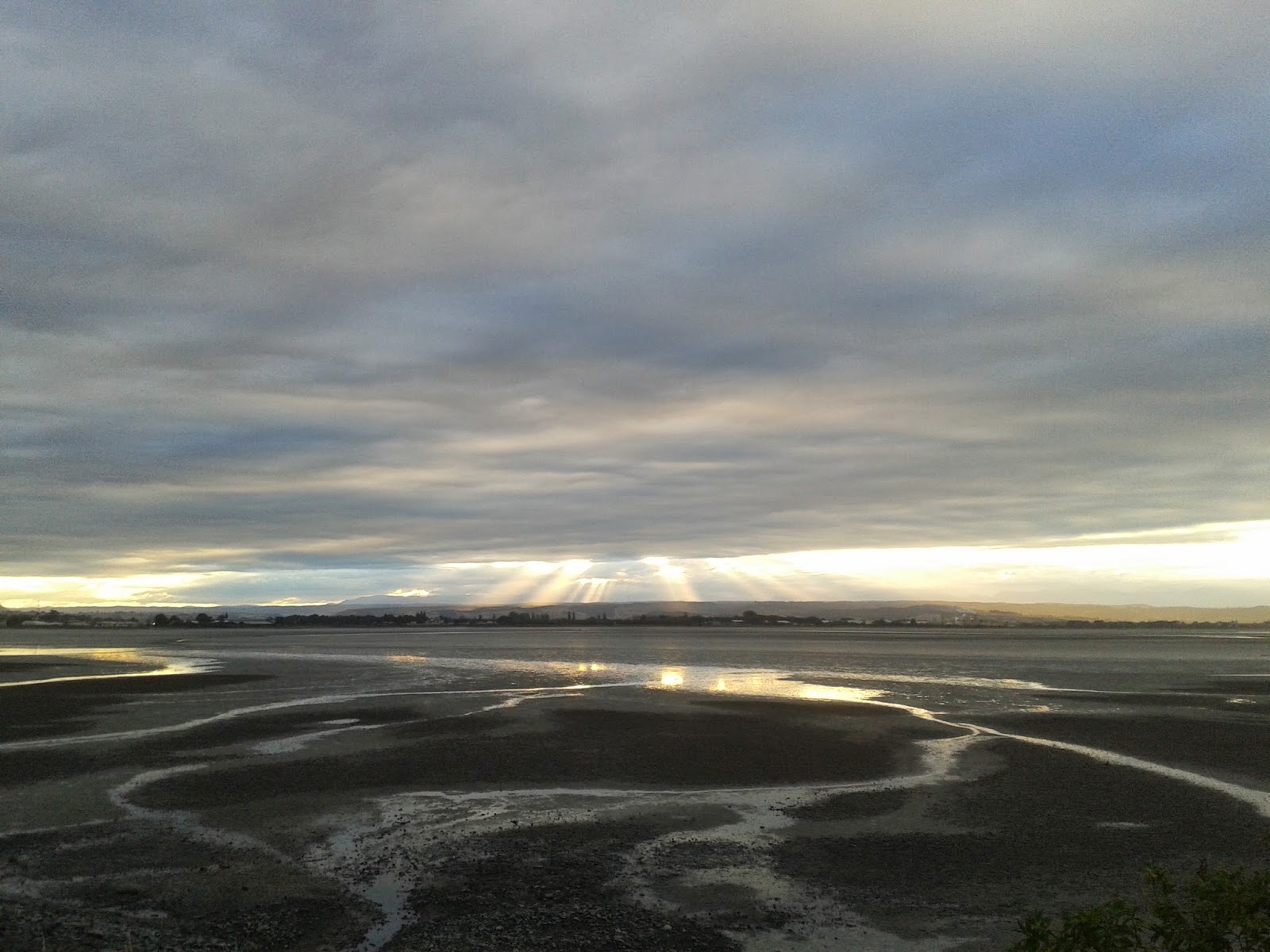 The 2014 edition of the Kiwi Brevet seems like a good enough excuse to break out into the world of blogging again I suppose...

Before I get into this I should fill y'all in - I've been waiting for the 2014 KB since about three days after completing the 2012 edition. Having read John's blog of the original Kiwi Brevet in 2010, I'd been really keen to see how the route felt in the original anti-clockwise direction (the 2012 route I completed was run clockwise). Also, with a natural inclination towards the endurance side of things, events like the Kiwi Brevet are about as far up my alley as you're likely to get without dinner and a movie.

One thing John touched on back in 2010 was the idea of riding the KB course quickly - minimal stopping time, no long lunch breaks, and not particularly social. I absolutely love a tough challenge, so this idea stuck in my head...

My planning was reasonably comprehensive, and I began acquiring equipment for the ride in about February …
Read more 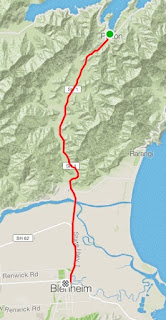 While I had some pretty good fitness leading into the Kiwi Brevet - it was only a couple of weeks after the GSB, after all - I was keen to roll around somewhere new. I've done the KB twice, once in each direction, and don't really feel there is much taking me back around that course.

Thankfully, the Kiwi Brevette is a thing - it's about half the distance, but a completely different course from what I've ridden previously, bar a couple of shared sections (The Wairau, and Queen Charlotte Drive, both of which are lovely in their own right). The 2017 edition was a clockwise loop from Blenheim, including the Wairau Valley, Tasman cycleways, Tennyson Inlet, and back around Port Underwood to Benheim. Well, that was the plan, at least...